Are you two dogs better than one? Will your resident dog cope with a new family member? Barket Club member Susi, shares their story of introducing a new puppy into an established dog household.

Bramble came into our home at 8 weeks old, described by her breeder as a ‘livewire’. This was the opposite of 8-year-old Kenny. He was very calm, placid… never said “boo” to a goose. All he wanted was a nice, quiet life.  All she wanted to do was run about and play with her new big brother. This meant establishing boundaries and rules for the dogs. 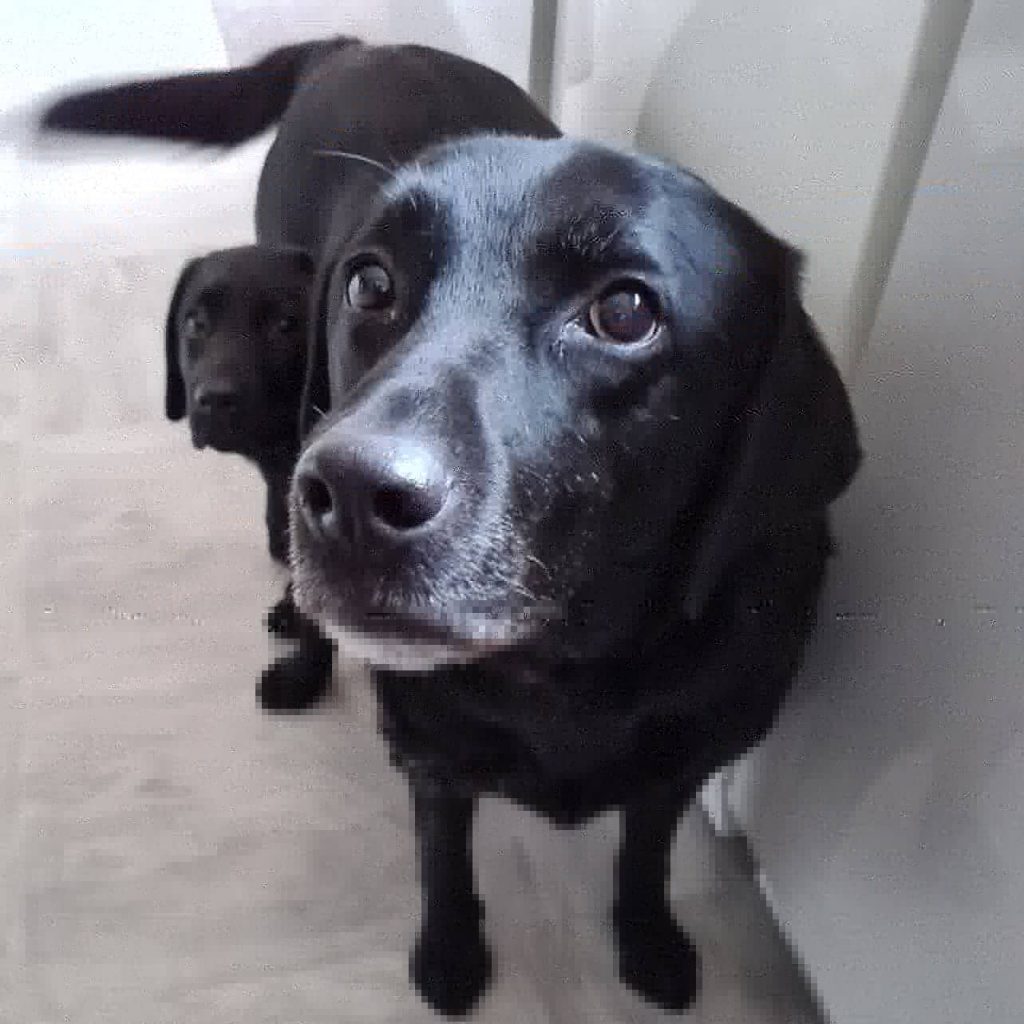 The rules went up on the fridge so no-one would miss them. The first rule – and one that still stands today – is that the dogs would never be fed together. Kenny gets to continue having his food in the kitchen while Bramble has hers in her pen. This is the same for every meal as Bramble can be a bit of a bully. Occasionally, one of the dogs will be scatter fed in the garden. This means that the other is in the pen or a different area. As we have now been doing this for six months, Bramble expects her meals in her pen so she races in there at mealtimes leaving Kenny to eat in peace.

Another of our rules was that the dogs would not be lead walked together until Bramble was able to walk nicely by herself. Now and again we would take them for an off-lead adventure – driving as close as we could to where they could roam free. This set us up nicely for now when I’m trying to introduce them walking together.  These walks together don’t happen very frequently as Bramble has a lot more energy and wants to go faster, while Kenny prefers to plod along at his own pace. It has taken 6 or 7 months for our dogs to integrate and get to a point where they will cuddle up on the sofa. Even now, they will still have their moments where Bramble annoys Kenny a little too much. On these occasions, they are separated until they have both done a shake to release tension and are calm.

Some people are incredibly lucky when introducing new dogs into their household. If the established dog is friendly and willing to have a playmate, this can be very beneficial. It can also be useful for dogs that may be a little bit more reserved as it can bring them out of their shell, but this isn’t true for every dog. If you are considering bringing a new friend into your house, there are some things you should think about.

How does your current dog respond to other dog-pals in your home? If possible, although it may be difficult presently, try and get someone with a similar type of dog to bring them around and see how they interact. You may find that even though your dog is very friendly when outside of your home, they maybe not so keen on having someone else in their house or garden. This doesn’t mean that you can’t have another dog, but it should mean that you take things a little bit more calmly and carefully.

It may be worthwhile to establish boundaries, in advance, for your current dog so they get used to areas they may not be able to go in, such as a pen or crate for the second dog. You can also get them used to eating their meals away from that area to avoid competition for food. Once the new dog is in the home, it’s very worthwhile teaching them both to settle individually and together. Making sure they can rest around each other and by themselves helps to prevent issues like frustration, separation distress, and resource guarding. Also make sure that everyone in the home, including visitors, are aware of rules and boundaries for the dogs.

I would also be cautious if you were considering getting two puppies from the same litter. As with all multi-dog households, each dog needs its own time – to be a confident solo dog – but this is especially important with littermates. They can become reliant on each other as they have spent all of their lives together. This also applies if you are considering getting two puppies that are similar in age from different litters. They can be very close together in their developmental stage and need time to learn to be their own dog.  This does not mean that two dogs of a similar age cannot live together successfully, just that more caution and precautions should be taken.

So, what do you think? Are you ready to welcome a new dog into your home?