It’s been such a year of highs and lows. So we decided we wanted to ensure our Barket Club members ended their year on a high!

What boosts our mood better than music? Well, of course, our dogs! And if we add Christmas into the mix – you’ve got a recipe for festive fun! That’s why we’re so excited that Heelwork to Music expert Mary Ann Nester is joining us as our guest expert this month. She’s going to help our club members get to grips with the basics of Heelwork to Music, as well as getting us ready to create a festive routine during our regular “train together” sessions. If you’re looking for something fun to do with your dogs during December, come and join us: https://barketplace.uk/bclub

What is Heelwork to Music? 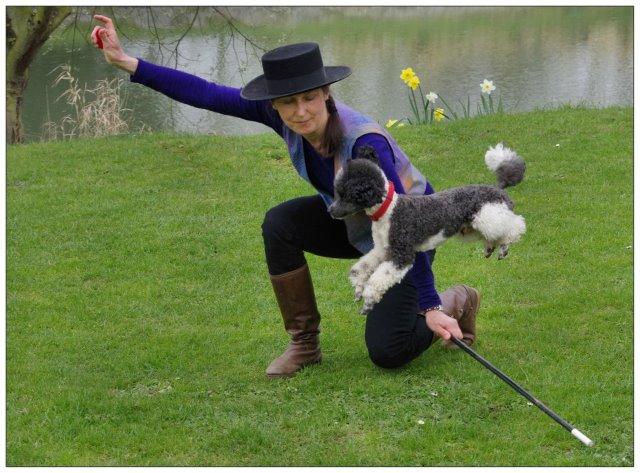 image credit: This is West County

Susi Colclough tells us all…

Heelwork to Music is an exceptionally popular dog sport the world over. With both competitors, enthusiasts, and fans sometimes devoting their lives to it. An amazing display of skills can be seen at competitions all over the country. Some of the highlights of Crufts are the HTM and Freestyle contests, including the Freestyle International event.

But what goes into this fascinating sport?

There are two main branches of dancing with dogs; Heelwork To Music (HTM) and Freestyle. Yes, they are different. Each has its own set of rules and regulations. Thankfully, the names give the game away as to their main difference. HTM is a performance set to music that includes heel position for two-thirds of their routine and up to one third with the dog out of heel. At heel, HTM includes eight different positions of the dog with the handler. Two with the dog facing the same direction as the human, two with them facing opposite ways, plus facing left or right in front and behind the handler. This makes you think creatively about the routine. Do you want to move quickly or slowly? How do you want the dog to move? As long as the dog is close and consistent with the handler, the sky is the limit.

Freestyle is less restrictive about where the dog can be in relation to their human counterpart. During Freestyle routines, the dog may move away and spend more time at a distance from their handler. There also tend to be a fair few props! Unlike HTM, Freestyle competitors can use costumes and pieces of equipment during their routine. Dogs can ride in carts, bring mops to their dancing buddy, and even jump through hoops. One of the rules to keep in mind though is that all props brought into the ring by the team must be used.

Competitors often like to tell a story through their routine, and a large part of that is down to the music they have chosen to dance to. In competition, there are rules on how long the music should last but it doesn’t need to be the same song all the way through. Mashups and remixes are allowed! Part of the judging criteria is about musical interpretation. How the routine fits with the music and the team themselves. According to the Kennel Club regulations “primary emphasis of musical interpretation should be on the dog’s movements although the handler may be expressive”. Although you are judged as a partnership, the dog is the main priority.

There are two other marking criteria for Kennel Club competitions; content/flow and accuracy/performance. Content and flow is about the routine being cohesive from start to finish – what the dog is doing and whether or not it seems appropriate for them structurally. Accuracy and performance focuses on the team working together. A point to emphasise is the dog wanting to work with their handler. There are rules against harsh handling – but judges also want to see the dog happy and enjoying the spectacle. After all, isn’t that what we all want to see during the performances?

The most fun part to watch as a spectator are the tricks the dogs do during their routines. These are elements that every dog can learn, and don’t require a musically inclined human end of the lead. You’ll see a lot of crossing paws, walking backwards, jumping through or over arms, and so much more! As long as it is safe for both human and hound, you can try it in HTM.

And now for something slightly different. There is a new sport emerging from America called Rally FrEe. Combining the fun, trick based elements from HTM with a bit of structure and a set course from Rally Obedience. Who knows, maybe it will take off over here? Only time will tell.

If you’d like to try your paw at Heelwork to Music, come and join us: https://barketplace.uk/bclub