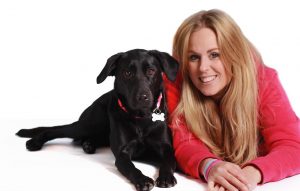 Jodie White (ISCP Dip. Canine Practitioner – TTouch Practitioner – The Real Dog Yoga Practitioner – Co-Author: Beyond the Bowl) is an educator first and foremost and has spent decades as a qualified teacher, lecturer, coach and demonstrator.  Jodie’s passion is in health, nutrition, holistic methods,  and gentle observations. Combined with specialising in calmness, reactivity and enrichment, this enables her to support behavioural changes with positive participation from the whole family in manageable and motivating steps. Here she offers some advice as to why adding enrichment activities into your puppy’s life can help set them up for success! 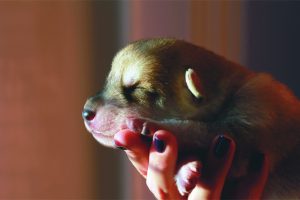 From the moment they are born, their neural connections (brain cells) are growing at a rapid rate and although we all know you can teach an old dog new tricks you equally want to try and get the balance right during the most critical point in the dog’s life. The puppy’s critical socialisation period, it is at this time, between weeks 3 and 12 (roughly a 9 week window) when you need to ideally be exposing them to problem solving activities, correctly exercising with low impact surface exploring items, calming choices and educating them in a wide variety of social and interactive games. As this period will provide the solid foundations for an emotionally stable, intelligent, content and well-balanced dog.

So with that said how can we get this period right and what even is the right balance?

First of all, let’s try and understand a little of how their brain works and develops between weeks 3 – 12 so that we have some understanding of the physical and emotional changes they are going through.

Once week 3 commences they are past the newborn mother dependent stage of being blind, death and toothless, needing her warmth for regulating body temperature, support with toileting, cleaning and so on. Despite having limited independence they still have their powerful sense of smell and touch so information is still being processed but it is by week 3 though that their world becomes an explosion of investigations from all their senses and they advance from the neonatal stage to the transitional period.

Their entire world becomes about forming the connections between the brains cells. Incredibly by week 16 their brains are approximately 10 times larger than when they were a newborn, this is not because the number of brain cells has increased but because of the trillions of growing connections between them all expanding, establishing sensory acceptance, shaping confidence, habits, social and environmental banked memories. So really consider every tiny experience the puppy has; the smells around him the things he sees, hears, feels, touches and tastes, every person he meets and other species he experiences, because every discovery he makes and experience he has will form, shape and build these trillions of new brain connections which will last his lifetime.

So ensuring we shape these connections and really support them during their transitional period is key. There are 3 segments that I would suggest ensures a well-rounded enrichment puppy plan; Exercise, Environment and Interactive learning – individually these provide a function but only combined do they fulfil the puppies needs during this period, resulting in setting them up as much as we can to be emotionally stable and balanced beings. 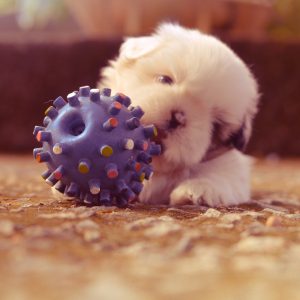 A stimulating environment has been shown to flourish the brain cells and nurture learning, this can be achieved by providing interactive toys, like KONGs, Snuffle Mats, Slow feeders, puzzle mats, present boxes, bones, and so many more choices now available. Combined with the correct amount of exercise; anybody that has had a child will know that empty spaces and lack of physical space for movements can really become damaging to their wellbeing. We have more soft play centres across the country than I care to tally, why? Because they need to move! Puppies just like children need their own soft play exercise, in a safe, calm sensory stimulating environment.  But the environment space should also include resting areas, as just like children they also need plenty of nap time (even when they don’t think so), over stimulating with exercise and toys can be just as problematic as not enough, so you really have to find the right balance for the individual puppy you have.

We then need to look at the interactive learning aspect, the connections they have and form with the people and other animals around them; problem-solving games are believed to increase neural formations and connections combining that with exercise and you have really boosted the ‘thinking part’ (cerebral cortex) of the brain. But one area that is concerning, is seeing puppies with an amazing environment full of toys and games but yet little interaction because it is easier to let them get on with it! This not only then allows for ‘over-stimulation’ and stress to occur (cortisol rush through the body) but in this critical period (and beyond) it really is vital that we engage, explore and rest together.

Puppies need guidance, they need monitoring so we can capture the correct behaviours and reinforce them, to support them through free shaping movement over different surfaces for ‘touch’ sensory experiences, which build confidence and inquisitive behaviours. To feel our touch in a non-invasive, gentle way, like with TTouch and be able to communicate with choices through games like the ‘bucket game’, which are all vitally enriching.

Keeping their heads low, body’s moving in a natural balanced motion, rather than changing everywhere can be achieved by using their noses with free shaping scent games and sounds, sights, people and smells can be paired with the puppies reinforcer to help limit any sensitivities, especially important during their fear period.

The great news is by investing in these key areas and combining together all 3 during this critical stage you will support and help set your puppy up for success in its future!

Jodie’s book (co-written with Diane Kasperowicz) “Beyond the Bowl: Enriching your dogs life through food and mental stimulation” is available to buy now.